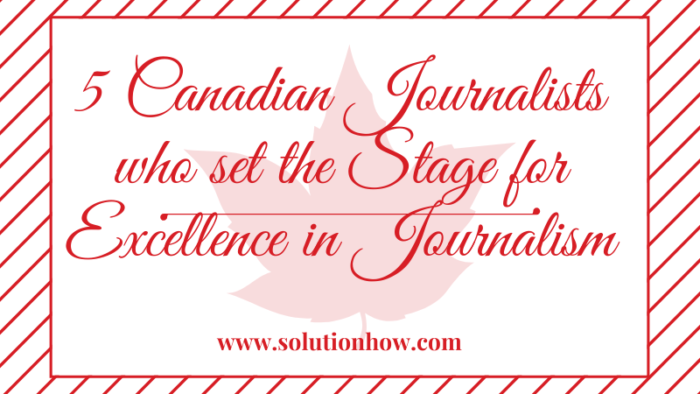 5 Canadian Journalists who set the Stage for Excellence in Journalism

Born in 1954, Fife is a political journalist in Canada who worked in the CTV news as the Ottawa chief. He also served bureau chief for ‘The Globe and Mail’ too, during which the show was renamed to CTV’s Question Period with The Globe and Mail’s Robert Fife. As a great journalist, he even exposed the Canadian Senate expenses Scandal. He even was a part of the team that broke down the story of SNC-Lavalin Affair. For a journalist, this is much more of a benchmark.

An English Canadian retired news anchor, Peter Mansbridge was the chief correspondent for CBC News, the anchor of The National. During that time, he was CBC’s flagship newscast. Worked first as a ticket agent, Peter was cast as the host of a CHFC’s late-night music program right from the ground. From this stage, Peter made his path right into the land of journalism. He continued as a reporter for CBW radio and then joined the CBWT-TV as a prime reported.

Out for qualifications, Joe was a side journalist while being an author, foreign correspondent and TV icon. After his parents were later killed, Joe went to pursue journalism and worked for the Prague bureau of Associated Press as a translator. As a journalist, his life was threatened when he fled to Czechoslovakia and then he stepped into Canada. He joined CBC that made his career, being an executive producer of “The National”. As a journalist, Joe made his career most on foreign correspondent reporting in various international wars.

Named as the Commonwealth broadcasting association’s journalist of the year for 2005, Arsenault was a senior correspondent in the CBC and also the co-host of “The National” in November 2017. Aside, Arsenault was nominated for 5 Gemini awards for being an exceptional journalist for “The National” and also won awards from the American Society of Professional journalists. Other noteworthy awards for Arsenault were the Emmy award and the Canadian screen award.

Known for his intense documentary of Gerald Bull, Eric Malling was quite famous in the 1970’s. Completing education at University of Saskatchewan in Bachelor of Arts, he completed his journalism from Carleton University. Malling usually nailed journalism, got the tag name as hard hitting journalist while going as the host of The Fifth Estate aired in 1976.