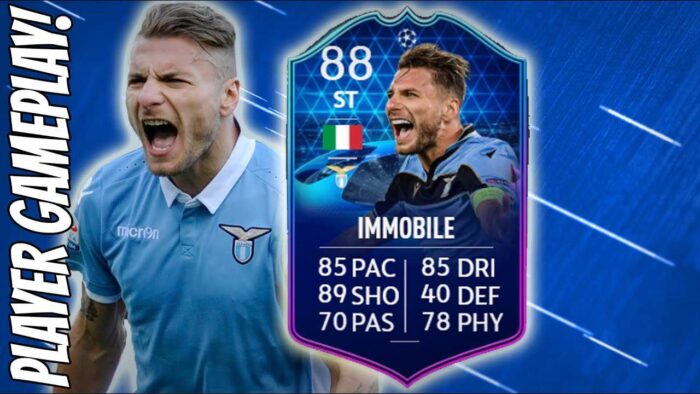 D: In this article, follow us to get into the FIFA 21 UCL TOTGS Immobile player review to check if the 88 Ciro Immobile card worth to pick.

A brand new FIFA 21 UCL TOTGS Immobile Squad Building Challenge just came out in Ultimate Team, you can earn a 88 rated FIFA 21 Ciro Immobile card as long as completed two squads. In this article, follow us to get into the FIFA 21 TOTGS Immobile player review to check if the card worth to pick. As a reference, the cheapest price to complete the 88 TOTGS Immobile SBC requires around 80K FIFA 21 Coins on PS4.

Players need to submit an 83 rated squad and 84 rated squad to earn a UEFA Champions League Team of the Tournament Ciro Immobile. Let’s get straight to the FIFA 21 Immobile player review.

The TOTGS card of Immobile is similar to his ordinary card, looking at the stats, three-star skill moves is a little tough, that is not going to fit your play style, four-star weak foot is really nice, and high/medium work rate, perfect work rate for a striker. Immobile has 85 pace, 89 shooting, 70 passing, 85 dribbling, 40 defending and 78 physical, you can apply an Engine chemistry style for the card, he does need a little extra pace and dribbling, with Engine, the acceleration can be improved to 88 and sprint speed can be improved to 91, which is pretty good. His shooting ability is excellent and well around, 94 finishing, 87 shot power, 81 long shots, 86 volleys, 89 penalties and 94 attacking position, he can score several goals for you in one match, if we look at the player traits, he has the Outside Foot Shot. When it comes to the passing, the rating is not great, 89 short pass and 83 curve are decent after boost, but other stats are terrible. The upgrade is critical to TOTGS Immobile because the dribbling stats got obvious improvements, he can achieve 82 agility, 89 balance, 95 dribbling, plus the original stats including 92 reactions, 86 ball control and 88 composure. As for the physical, 79 stamina makes him most likely not able to throughout the whole 90 minutes, so you can use him as a sub.

If you use FUT 21 TOTGS Immobile in the game, you will find he is a goal scoring machine, he is absolutely unbelievable, not only feels good on the ball, but also the pace and shooting are incredible, some people may think this card was about to be slow, but he’s going to outpace lots of players. This card also has got better dribbling as expected, if you do not care about five-star skill moves and know how to use a three-star skill moves in the striker position, the 88 Ciro Immobile is literally a perfect choice for you. Overall, this FIFA 21 TOTGS Immobile SBC card is worth to complete with 80K FIFA Coins, even though it’s obviously more expensive than his common card. You can also earn a Jumbo Gold Pack and a Small Rare Mixed Players Pack as the reward.