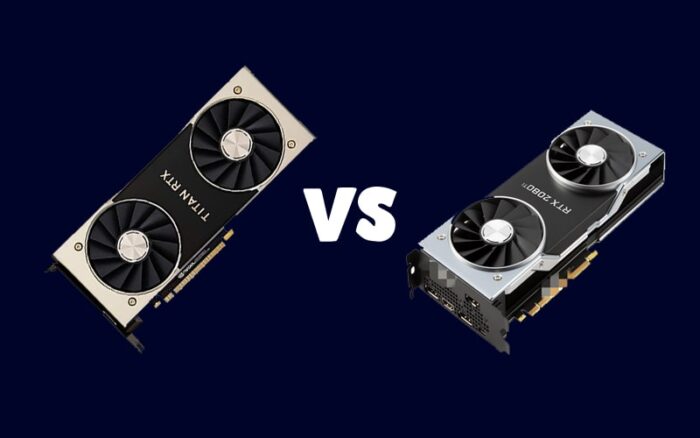 Nvidia TITAN RTX and GeForce RTX 2080 Ti both are totally far away from each other in terms of price and maximum RAM amount. Titan RTX is super pricey with 24GB of RAM whereas RTX 2080 Ti comes for less than a thousand bucks with only 11GB RAM. Each of them has an individual speciality and connectivity with other components. For example, the motherboard for RTX 2080 Ti should be totally different from the one of Titan RTX, though there are some exceptions. Compared to Titan RTX, 2080 Ti is less powerful in some aspects. In other words, It comes with different perspectives to different persons.

Nvidia Titan RTX is a powerful and non-brainer card with a pricey tag. According to Nvidia, it was designed while keeping the content creation and productive works in mind. Be it AI researching, content creating or deep learning developing, Titan RTX does the job smoothly. The price is not high for nothing, right? It does not provide as impressive gaming performance as it looks. I’m saying it again, this GPU was mainly made for intense workloads. But, it can provide much better FPS performance than 2080 ti. The professionals with or without heavy pockets would like to buy it for its fastest and intense tolerance of workloads.

GeForce RTX 2080 Ti, said to be the fastest desktop Graphics card consumer of 2018. Even though this one is also not much compatible for hardcore gamers, it can slay with max settings in 4K for most of the current AAA games. 11GB RAM is not the least one but if you compare it with the Titan RTX, it becomes a tiny number. Being the world’s first ray tracing GPU, this GPU is like a beast for games. The reinvented design and turning features made many enthusiasts buy it.

In fine, you can say they are not compatible for being in a competition. With their individual unique features, each of them has different popularity among the enthusiasts.