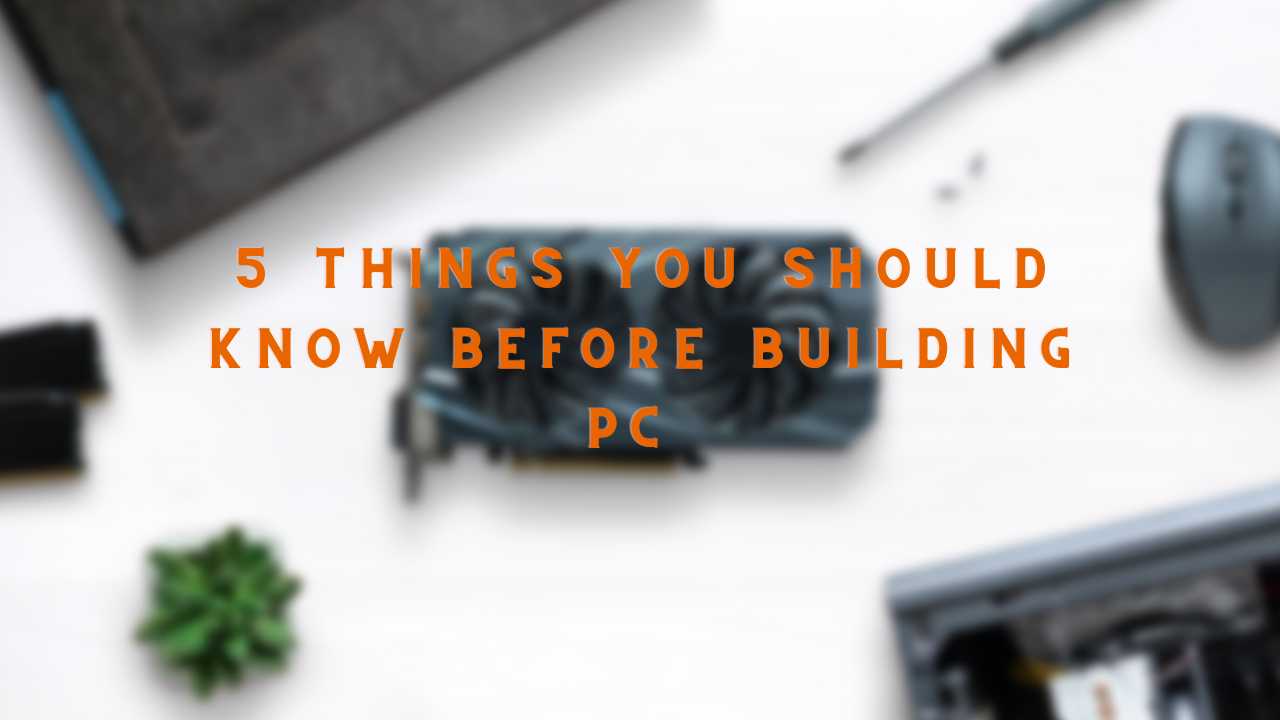 5 Things You Should Know Before Building PC

Alright, so you want to build a computer. Maybe the one you have now is dying or maybe you just decided that it’s time to upgrade! Building your own PC is an excellent way to get exactly what you need and nothing extra. The more I learn about building computers, the more I realize how little I actually know. I decided to document my journey and share what I’ve learned along the way in hopes that it will help you.

These aren’t “hard fast rules” but more like guidelines. There are exceptions to every “rule”, so don’t be afraid to try something different if you know what you’re doing!

If you’re anything like me, buying components feels like the most daunting task. Where do you order from? What is FastTech? Where are the best deals on RAM? Do I need to overclock the CPU or cool the motherboard chipset down with liquid metal? What does all this mean?!

Don’t worry, I’m here for you. First, you’ll need to decide on an online vendor. I’ve used Newegg in the past and had great experiences with them, but there are plenty of others out there that will have good deals. Find one that is trustworthy or has a return policy that you’re comfortable with. Also, be sure to check if they offer shipping insurance. If you’re accidentally sent the wrong item, it’s always better to know you can get a refund.

4- Pre Planned What You Buy

A pc parts list can be as simple or complex as you need it to be. The simplest will only require a basic understanding of what each part does, and an average price tag. It’s not so much about making the best build, but more about deciding what you want to spend money on.)

​(It is recommended to save this list someplace that one will refer back to later. It is also recommended that the reader has an understanding of how parts work before incorporating that into their decision making.

There are tons of options when selecting the best pc case for your build. You have to consider airflow , compatibility and a lot other things to get a best case which performs and looks better . There are some online pc case buying guides that will help you to pick the best one for your build.

These cases are larger than normal, so they offer more space–both for the hardware inside the PC and for extra features on the outside. They can also accommodate bigger motherboards. Go with this size if you want to build a beefy gaming system with multiple GPUs (or plan on adding extra components later) and if you have a lot of stuff you want to store inside the PC, like numerous hard drives.

These cases are a compromise between full-size towers and smaller mini ITX designs–thus, they offer a little bit of room for all your components but also aren’t as large as full-size towers. They can accommodate most standard size components–like graphics cards, cases and power supplies.

These are the smallest of the bunch, with room for only your motherboard (and they typically don’t even have space for an optical drive). These cases are geared toward small form factor PCs meant to sit on or under your desk–that is, if you can find enough room to put them.

These mid-sized cases are better than their name suggests–they offer plenty of room for all your parts and expansions, but they also aren’t as big as full tower designs. The best thing about these cases is that they’re typically cheaper than full tower cases and can accommodate almost all standard components.

These cases don’t offer any kind of internal metal walls or roofs, which allows for better cooling (and more open access to your parts). The main downside is that you’ll need to be careful about dust and other contaminants getting inside the case.

This is the most common size for a PC tower, and it offers enough room for all but the biggest of graphics cards (which means you can use any standard size power supply). The drawbacks to this form factor are its lack of space compared with bigger cases and the fact that you don’t have as many options. Some of the compact atx cases are compatible of atx motherboard which can be a good option if your room is small .

Building a computer is easy with this simple guide. Building a computer can be a daunting task for the inexperienced, but fear not! With a little bit of effort, you’ll have your own rig up and running before you know it! That said, let’s get started!

First things first, you’ll need to decide what kind of computer you want. Are you going for a budget build? A mid-range build? Or a high end build? Budget builds are perfect if you’re just getting into PC gaming and don’t absolutely need bleeding edge performance. Mid range builds can handle most modern games without issue, but will usually run hotter and louder. High end builds are for the ultimate performance junkies, but obviously these will cost a pretty penny more than your average mid range build.

It seems like a no-brainer: if you don’t use enough thermal paste on your CPU, the cooling performance will suffer and may even overheat. But how much is “enough” and how much is “too little”?

An investigation was undertaken by Der8auer in his recent livestreams . He states that applying too much thermal paste isn’t the only cause of a bad-performing heat sink, chewed up thermal pads can also be responsible.

Der8auer has found out that the thinner the layer of heat conducting paste between CPU and heat sink is, the better. He used an infrared camera to check how different thicknesses influenced the heat transfer from CPU to cooling system. In the following picture, only a thin layer of thermal paste was applied onto the CPU: