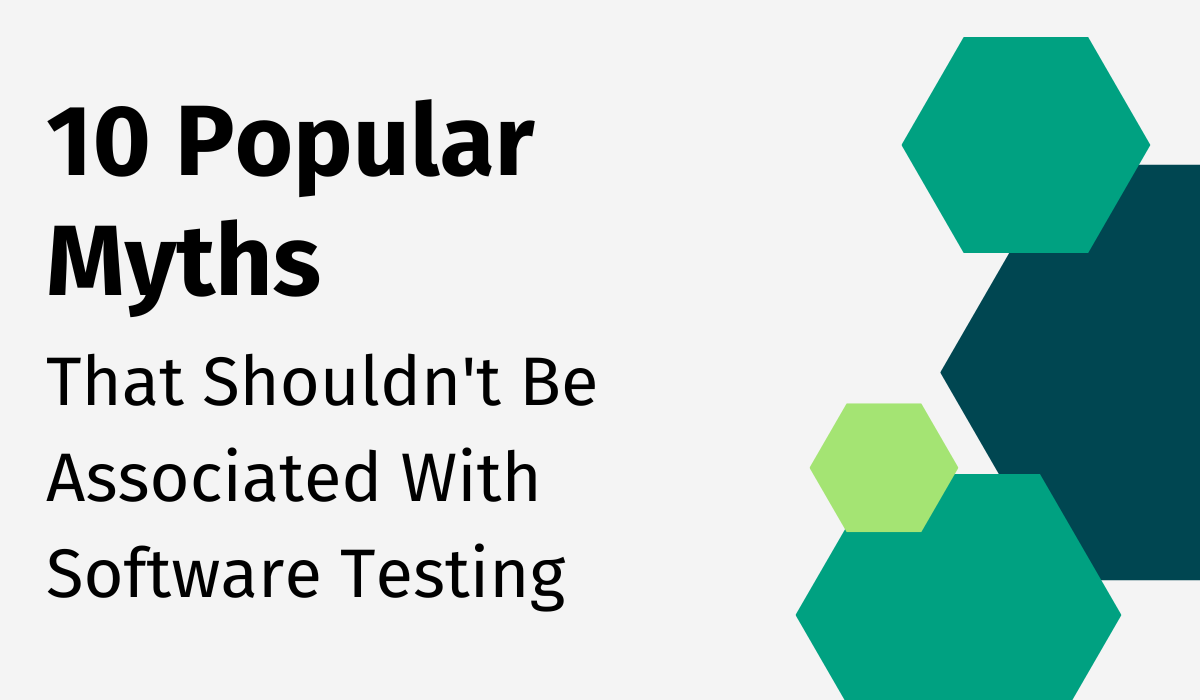 10 Popular Myths That Shouldn’t Be Associated With Software Testing

Software testing has always been an integral part of the Software Development Life Cycle. It is, however, the latest development in the information technology industry. Hence separating fact from fiction is necessary, especially when you want no room for error.

You must have heard of the poor people who had to pay extra bucks or did not meet the quality standards because they did not understand the concept and scope of testing. If you’re not keen on becoming one of them – this article is for you.

Let’s get to busting one myth after another.

We’ve seen a major shift in professions after multiple SaaS companies emerged during the pandemic. Digitization is the new boom. Due to this, many have moved to the most profound entry-level job in the software industry – Testing.

It’s easy for a layman to understand testing as an easy job that can be done by any sort of person. On the shell, it might look like interacting with software to check if it’s working well. It’s the same as saying that an architect draws houses.

The truth is that testing is a complex process. The Quality Assessment (QA) Engineers have to understand and take an end-to-end knowledge transfer on the product. They also have to hypothesize working simulations of the application to accept or reject. Their scope expands way beyond finding defects in the software. It is more about asking the right questions to extract relevant information within the application.

A group of QA engineers is sitting and browsing through apps and their features. What could be interesting about it?

Picture this: You have to understand the target audience and predict their psychology and how they would interact with the application. You have to be creative enough to come up with test cases that match the usage patterns of users.

Myth 3: Testers are responsible for the bugs

Testers are the ones who look for bugs. They don’t create them. Project development leaves a lot of scope for human error. As QA engineers, these testers ensure that the quality is at its best.

While there is a common stigma that testers are mutually hated across the company, it is very untrue.

The testers are the ones who help the developers provide the best output, and in the process, they take the high road of making sure there are zero errors before deploying the software.

Myth 4: Perfectionism is the Goal

Some might disagree when we state that perfectionism is not the goal of Quality Assessment. However, it is true. In the world of software development, perfect software does not exist. This might be hard news for a perfectionist who wants to abide by the book for the QA process.

The key is to know when to stop testing. The idea is to balance the errors and prioritize because there are bigger things at stake, such as the deploying deadline provided by a client.

It is not ideal when your e-commerce site is in perfect condition, but you are not letting the product launch because the footer is not loading in the right color.

It’s not uncommon for companies to let go of their QA engineers just to focus on their “Maintenance” and “Marketing”. But the truth is that any change after the release of the product is going to cost twice as much for the company. Testing during the development gives a lot of insights for the developers to add and remove features in the software architecture.

Moreover, releasing a product in the market without perfection can easily damage the brand image. Frequent crashes, freezes, and dysfunctionalities are usually frowned upon as low-quality products. Hiring developers to fix those issues again will cost more than twice as much.

In the world of AI and Machine learning, where everything is automated, testing also has an updated technology in which tests can be automated. This is a very tempting option for organizations that want to meet their deadlines in advance and cut down on costs. However, they are a few things to keep in mind.

Different types of tests have different requirements. Few tests are repetitive and can be automated. A few of them are exploratory tests and might need some manual testing paired with creativity. Some tests can use a mix of both.

Testing is viewed as a rather simple activity that will consume almost no time for the QA and the reworks. However, the loophole lies in the almost. Testing is designed to identify errors that are hard to view from a developer’s perspective. That is also the purpose of adapting a QA process – to be optimal from every possible perspective.

The core reason for any delay in project delivery is the failure of proper planning and setting unrealistic expectations from the developing and testing team. Setting shorter deadlines will add more pressure on the development team and pave the way for more errors.

The tester needs to be able to distinguish software with a bad UI/UX from one with a good UI/UX. It might involve knowing the basics of user experience and user interface laws. The QA engineer might also need to be creative while coming up with test cases that are custom for a minor segment of the target audience.

They say that an efficient development team eliminates the need for any sort of testing in the process. Here’s a reality check – the faster the software develops, the more scope there is for error because the priority was to create software in as less time as possible. Moreover, the developers do what they do best, write code for what they are meant for. They might not be thinking about the users’ perspective when they are writing thousands of lines of code. This proves the relevance of a QA team, even with a team of efficient and talented developers.

Myth 10: Testing starts only after the product is ready

The reality is that the Software Development Life Cycle does not function in that fashion. The first fact is that there is scope for errors in every stage which might get carried forward to the next stage of development, leading to an accumulation. The second fact is that not all errors can wait until the end stage. Some need to be fixed proactively at every stage of completion.

We’ve had all the myths busted. However, there’s a fraction of truth in each of them. The key learning from this is that developers do what they do best, and testers do what they do best. The only thing that they both need to have in common is the ultimate goal for the project and company – to deliver with the highest possible quality.

For most organizations, TestGrid is the preferred automation testing tool as it simplifies the entire test process, letting you perform end-to-end testing with ease; for instance, users can perform automated testing with low code or without writing any code. Its simple drag-and-drop interface allows TestGrid to be used by developers, testers, and managers.