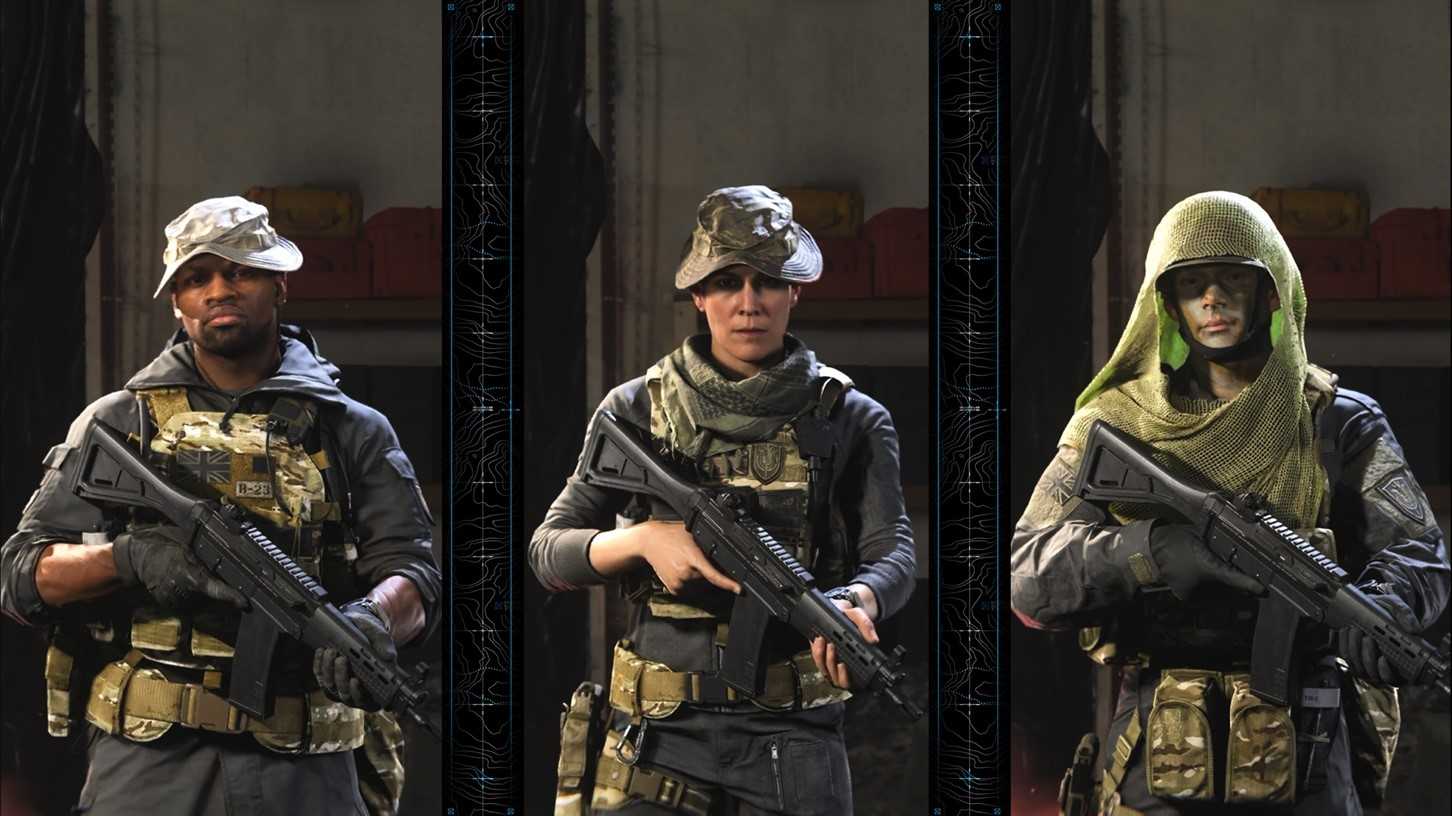 I want to let you guys know all of the tips.

The beginners’ stuff helped us when we first started playing the game.

So we’re going to jump right in with the tips.

This is the one tip you don’t want to skip as a beginner.

Jump in the menus. Edit that loadout, pick your favourite weapons, the ones that you know you perform well with.

You will not regret doing this now because it’s definitely going to help you later on.

Now in a regular Call of Duty, you would spawn in with all these loadouts.

Of course, this is a BR mode. It’s a new game type.

But within the mode itself, there are airdrops that come down.

These airdrops allow you to loot them and pick one of your custom loadouts onto your character.

You can also buy this, which we’ll talk about a little more later on the mechanics of buying things.

But right now, editing that load out and looking out for those airdrops that let you pick your loadout is going to help you massively.

This is super important because it lets you pick the exact weapons you know you’re good with and know you like to use.

Secondly, it gives you perks.

Perks are so prominent in this game that no one has them unless they edit a load out and then get it out within the game through the airdrops.

The perks are so vital because they buff your character above someone who doesn’t have them.

For example, something like a quick fix will let you immediately start rejecting health after you down someone.

So when you’re taking on a squad, you can down one of their players’ recover very quickly.

Whereas a regular player wouldn’t get that extra recovery

Another perk like overkill lets you add two primary weapons into this loadout.

So that when you put that onto yourself in the BR game mode.

You immediately have your two best and favourite weapons that you don’t have to use a sidearm or whatever other random thing you’ve looted up till that point.

And then there are perks like Tracker, which are nuts. In the BR mode, they let you see your opponent’s footprints.

So you know which corner they’re camping behind, where people have been and so on.

It’s such an advantage over someone that didn’t make this loadout, didn’t use it within the game and is just looting around like everyone else.

You will have the edge over those people that didn’t have their favourite loadout already set up.

You spawn in jumping out of the plane and then parachute to the drop location that you choose.

The most important thing to know is that controls matter while you’re parachuting.

And that applies to pretty much every direction. But if you dropped a little bit far away from where it is, you want to go.

There’s a little trick that you can do after you’ve got that initial sort of boost from jumping out of the plane.

You can open up your parachute and then cut it again and move in the direction that you want to go.

And this will give you almost like a speed boost in that direction for a few seconds while you’re free falling.

And then you’re kind of taper off, and you’ll start going more down than you are to the side.

You can repeat this by pulling your parachute, cutting it and moving in that direction.

You’ll be amazed that you can gain a lot of ground in a direction by doing this.

And it does let you get far away from the path that the plane flew in.

Remember, if you drop from the plane before everyone else, loot first, and you might just get that weapon and be able to kill someone while they’re still parachuting down.

It’s kind of crazy to kill someone before they even land, but you can do it. Here are some other call of duty vanguard aimbot you can use to improve your game.

Now from experience and by asking other pro players, I’ve concluded that;

There doesn’t seem to be a condensed area of high-tier loot or an area that just has trash.

So what I recommend is to drop to the area of the map that you know best from the regular Call of Duty Modern Warfare maps.

For example, if you’ve played the new Modern Warfare before and are a fan of Ground War, you might have played a lot in the Tavorsk District.

This is within the war zone map as well.

You can go downtown to the Tavorsk District area, and it will be a very familiar set-up for you.

You’re going to know your way around the buildings, know what rooftops to look out for, and it’s going to give you an edge over an area that’s entirely new to you.

This applies to several different maps within the game as well.

If you haven’t played the new model Warfare before, you won’t know these areas, but if you have or you’ve been watching videos or game players of it.

Then you might have a rough idea of some of the areas to go to and some popular choke points or areas that people like to camp.

It’s going to help you out when you first start the game.

I know this sounds like a stupid and obvious tip, but let me just explain.

When you run across loot, you’ll pick up some things but not everything.

When you kill a player with a lot of stuff, it can get jumbled and a bit messy, especially when you’re talking about squad wipes within the same room.

But some things like your lethal and your technical grenade, field upgrade slots, killstreaks, and weapons will not be picked up automatically.

A game that does have stopping power rounds as a field upgrade will give you a flat damage boost on your entire magazine.

So in a 1V1 scenario with the same weapon, you will win because you have stopping power rounds.

Don’t just run over it and assume that you’ve picked up everything you need.

The same thing applies to your grenade and your tactical grenades slot.

Running over it even when you don’t already have that equipment will not automatically equip it to you.

You have to look at it and equip it.

So you could be running around without a grenade without a flashbang because you missed it.

Then you’re going to run into a squad that all have grenades and flashbangs, and it’s going to be bad for you.

Because there are a few settings that you don’t want to miss that will give you an edge.

This applies to both keyboard, mouse, and controller players as well.

If you’re a controller player, you can use the technical load out over the default loadout.

This will let you have much more control over your aim while you’re doing the classic Call of Duty Drop Shot.

As it applies those things onto your analog sticks rather than any buttons, so you can aim while drop shotting still.

There is a little setting for controller players as well that you want to change that’s;

Enable contextual tap. This will allow you to tap the X button for most things rather than hold it down.

It lets you be freer on your controller. It enables you to be more aware and quickly react to things because you don’t have to hold down a button.

For pc players, you want to increase your field of view.

This is a straight-up advantage if you can get used to it. It’ll let you see more on the street and around you.

So definitely increase that field of use slider as far as you can or until it gets in the way of your enjoyment.

This is important for every engagement you have within Warzone.

In traditional Call of Duty games, you don’t have these kinds of armour mechanics.

So this is something new, and it has made the time to kill longer if you have full armour.

You have three bars, and you can find these armour plates when you activate them. It gives you a bar or refills a bar that’s been damaged obviously to a maximum of three.

You can carry five armour plates with you at one time.

You 100% want to be having full armour for every engagement.

It makes a difference. It’s a straight-up advantage.

It’s like having a bigger health bar than the enemy, and it does make a difference when you’re shooting people.

That being said, headshot damage is still prominent in this.

You can one-tap people with a sniper rifle regardless of their armour, but for things like assault rifles or SMGs, it’s going to make a massive difference.

Thank you for reading this far, guys.

I hope all of these tips proved informative. Let me know in the comments down below, till next time.