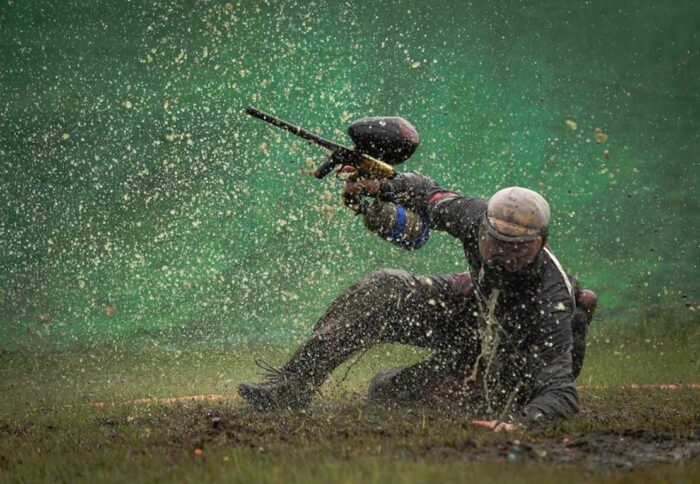 Paintball is an exciting skirmish sports game that can be played indoors or outdoor. Under this, players of one team compete with the opponent team by shooting them with paintballs. These paintballs are shot through paintball markers/guns, which were initially designed for marking trees and cattle. A protective helmet, body armor is optional to wear. Different games can be played through Paintball like flag capturing, opponents’ elimination, ammunition limits, woodsball, mailsmil, and speedball.

Origin of the paintball Industry

The origin of Paintball started in the 1960s when the paintball marker was invented by Charles nelson of the nelson paint company. The company invented markers to mark animals, which was also used by the rancher, and to mark trees, which was an efficient way to mark all those who need to be cut down. The first paintball name was Gelatin horse oil in which they injected paint.

The nelson paintball company first collaborated with the Crosman Company, and they made Crosman 707 paintball marker, but unfortunately, they didn’t get success. Afterward, Charles agreed with Daisy Splotchmaker in 1972 and launched Nel-spot 007. The company tried to sell their marker in the market and found success with BB gun manufacturers who turned gun into the marker, which fired a maximum of 12 paintballs.

The first game of Paintball

Charles Gaines and Hayes noel invented this shooting sport in May 1981 in New Hampshire. The first game of Paintball was played by bob Gurnsey, Hayes Noel, and Charles Gaines on June 7th, 1981, with their friends using nelson’s marker in a wooden area of New Hampshire. But before the game, one test needed to be done to confirm that the balls didn’t hurt much. Bob Gurnsey developed the rules of Paintball.

Around 12 players played and competed in the first game of Paintball. Each player wore body armor and eye protection. The players were divided into two teams. The first half was hunters, and the rest were city folk, surgeon, boxer, venture capitalist, and a forester.

They played on the cross-country ski area and decided to capture the flags. Four flag stations and 48 flags were on the game field. Four Marshalls were appointed in the game to help the city folk locate the flags. Ritchie white and the forester won Paintball’s first game, who didn’t even shot the single fireball. Sportswriter Bob Jones published the article on the game, which later caught national and international people’s interest.

Birth of the paintball industry

Bob Jones published an article about the game he had played with his friends. After it got some attention, they began selling markers, goggles, rulebooks, and Paintball. They also contracted with Nelson Paint Company to provide guns and equipment.

The first field to play Gurnsey created a paintball game in 1982 in New Hampshire. Also, the first outdoor paintball field opened in 1985 in England. Several fields were opened for paintball games by National Survival game Inc who franchised Gurnsey business throughout the USA. As the popularity increased, fields became smaller for the fast action paintball game. That’s why in the late 1980s, the international paintball players association was founded, which set 300 feet per second speed limit and ensure the growth and safety of Paintball.

After saw a business opportunity, players Jeff Perlmutter and Dave freeman talked with the National Survival game but disagreed on a deal. So, they started their company name “Pursuit Marketing Incorporated” and dealt with Benjamin Sheridan to develop their paintball marker. After getting success, Guernsey hosted a paintball tournament in 1983, the national survival game national championship.

In 1984 people started calling it Paintball rather than a National survival game, and products like a best paintball guns, harness, barrel cleaners, water-based paintballs were mass-produced. According to the survey, it was found that by 1989, around 75,000 people played paintball weekends in the US.

On the other hand, rival paintball companies saw the opportunity and launched the Paintball in which they added a pump for easy cocking, which replaces the Nel-Spot’s 12. Tippmann Pneumatics offers the first full automatic Tippmann SMG-60 Paintball gun. They also develop the first co2 tank with a pin value. Company name WPG, which Bud Orr owned, launched the first WPG sniper best paintball guns (quickly removable barrels and caliber conversions) in the market. He also develops the paintball hopper holding 45 paintballs. The road motor-bicycle sports company JT also put hands in the paintball market. Unlike others, they produce the JT paintball goggle, which was designed for impact protection.

The paintball industry took off throughout the 1990s and became a famous sports game around the world. Biodegradable, water-soluble paintballs and syder guns equipment also came into the market. The first tournament was hosted, and the first national paintball players’ leagues were formed. In 1995 paintball had its first debut in world championships games. It was a proud and iconic moment for all of the people who were behind its journey.

In today’s world, Paintball is one of the famous game among teenagers and adults. For enjoyment, people play this game with their friends or family. There are also more alternatives to paintball now like airsoft, lazer tag, and gel blasters.

Almost in every country, it is played by people. Various tournaments, leagues, events organized by the countries in which professionals come together to play for their nation. Today vast range of equipment is developed for paintball games to make it more safe and fun, like pioneering markers, masks, safety goggles, combat suits, and air systems. A wide selection of different paintball games is there, each having different rules. Some of the best games are elimination, capturing the flag, attacking and defending the king of the hill, and bomb squad.