Here we have compared 5 front end frameworks that are the most popular. Who determined the popularity? Not us but the State of JavaScript Survey 2020. 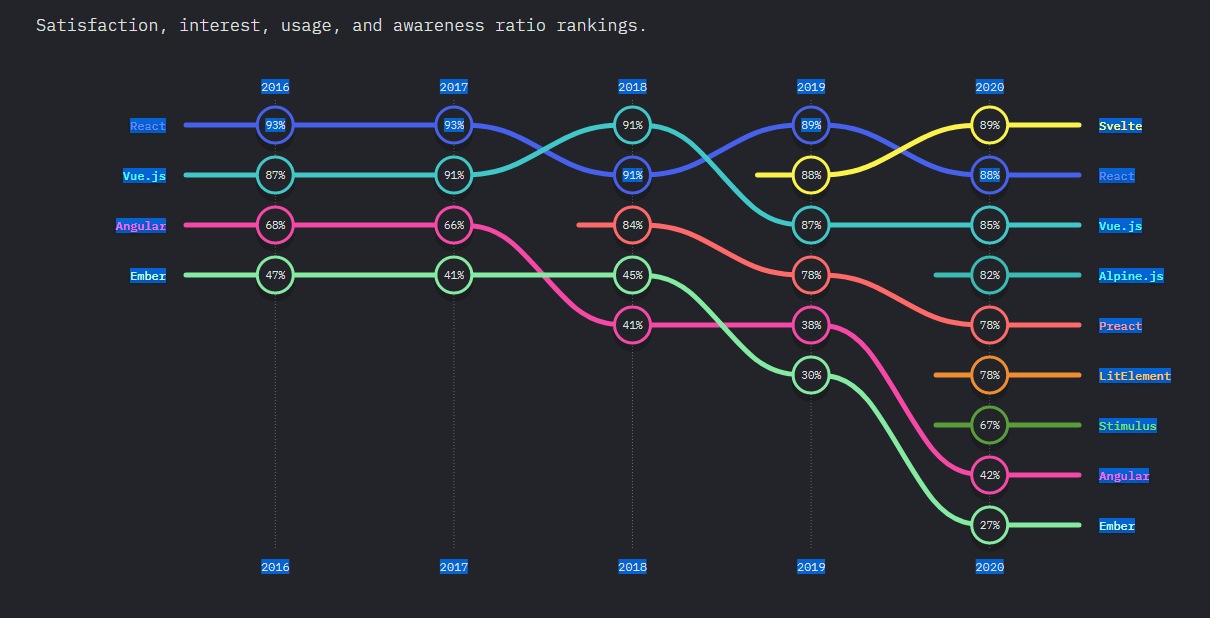 In the next five minutes, you will learn:

With 57.5% search volume as per Google Trends, React tops the chart of front end JavaScript frameworks. 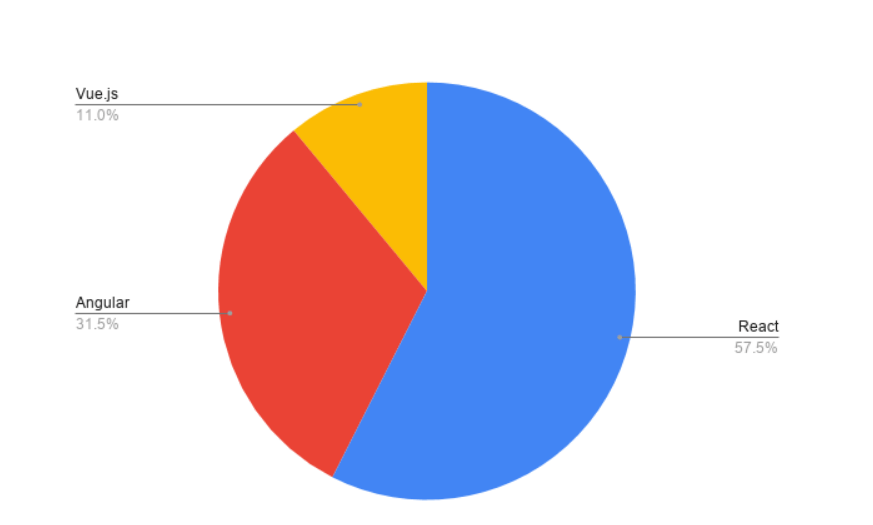 Over 1.5 million websites use React including PayPal and AirBnB.

When to use React?

Before you hire a dedicated front-end developer, you must know how and when to use it in web-development. React is best suited for complex projects with a number of blocks such as buttons, navigation panels, and accordion sections. Furthermore, React is more efficient when used with external libraries such as Redux.

Over 600K websites use Angular as the front-end framework. Google presented the modern TypeScript-based open-source framework in 2009. Thus, you can be sure of its authenticity and performance.

When to use Angular?

Angular is the optimal framework for developing large and enterprise-scale applications.

Over 700K. That’s the number of websites that use Vue. Among the over 700K, there are giants such as Alibaba and Adobe.

Furthermore, developers downloaded the front-end framework over 40 million times in 2020. That should tell you something about the framework’s popularity.

Vue is one of the most lightweight front-end frameworks out there. The downloadable files add up to 20 Kilobytes.

When to use Vue?

Vue is best suited for building a single-page application or launching a small project. Why? The front-end framework integrates with existing server pages with ease. Furthermore, Vue supports developers with a wide range of powerful features such as bundling, code-splitting, and tree-shaking.

These are some of the websites that use Svelte. The front-end framework is an open-sourced TypeScript-written JavaScript framework.

The developers claim Svelte converts apps into ideal JavaScript at build time rather than interpreting the application code at run time. Thus, you won’t pay the performance cost of the framework’s abstractions.

When to use Svelte?

Use Svelte for small app projects. The front-end framework is best suited for beginner front end developers, thanks to the simple syntax the framework uses. Furthermore, Svelte never needs DOM manipulation and makes sure the browser takes as little workload as possible. The process speeds up the web product.

Ember offers everything from a routing solution, to an in-built modern test harness, to the data layer for building a front-end JavaScript application.

The front-end framework doesn’t have a large community. However, the members are engaged. Furthermore, the community offers forums and a Discord server for solving coding issues.

When to use Ember?

Which front end framework is the most popular?

The short answer? Depends. Overall React tops the chart of most popular front-end frameworks. However, depending on the need, the popularity of a front-end framework changes. Ember and Angular are popular for complex and feature-rich websites whereas developers choose Vue and Svelte for small projects.

In this article, you have learnt:

I hope you learned something new.