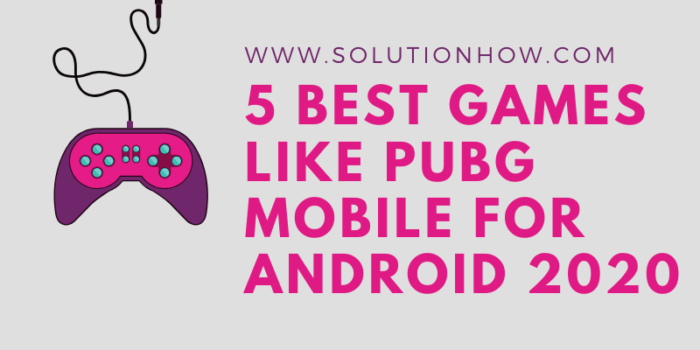 Ever since Pubg has launched, it has taken the video game industry by storm. As it has become one of the best as well as most played game in the history. We can’t even blame it for this much popularity as the game the actually fun to play. Since many teenagers, as well as the adults, got addicted to the game, some countries even banned the game. Now that’s some serious issue here. But part of this many people are unable to play this popular game due to many reasons. Some don’t have the phone that supports pub others got memory issues with their phone as when they start to play the game their phone starts to lag. All this is because of the large size of the game.

In this article, we have listed out 5 best games like pubg mobile which you can easily install as well as play without any issues. Take a look at the article to find out the pubg like games for Android.

Gerena is one of the best pubg like game you can find on play store. The game has got more than 500 million downloads which only suggests how popular the game is. Furthermore, everyone has left some good reviews for the game.

The best thing about the game is, it only lasts for 10 minutes! And that’s why people who can’t spend too much time on the phone love the game. Rest of the features are somewhat similar to pubg. So next time you wanna catch a break and play pubg, you should go for this game.

If the space of the pubg is the main reason why you can’t play the game then don’t worry because StarFall is a perfect substitute for the game. Millions of people are playing this game and they have liked it too. The best part about the game is you can play it both online as well as offline.

There are cool weapons, amazing gameplay as well as the smooth control which will make you fall for this game. You can also play with your friends, online and offline.

Firing squad is a new entry in the list of best games like ping mobile for Android list. This one may be the smallest size game you can find on the Play Store which resembles the pubg gameplay. Over 10 million people have downloaded the game and it has even got a decent response from players. The game is all about shooting and surviving till the end. So if you get a chance, then try it out.

With more than 50 million downloads, Hopeless Land had managed to make it to our list of best pubg like games. You will be battling against 99 other players and show your strength as a shooter. It won’t let you down with its amazing gameplay as well.

Knives Out is as interesting as its name suggests. You can play it with your squad and make strategies to defeat the enemy team. Its graphics and controls are impressive. This is also a small-sized game, so you won’t have to worry about your phone memory.

So these are the best games like pubg mobile for Android. And you can totally rely on them for having fun just like the pubg. We also have best names for pubg. You can check at techiwar. One of the best technique site. We hope you liked the article thank you for visiting our page.